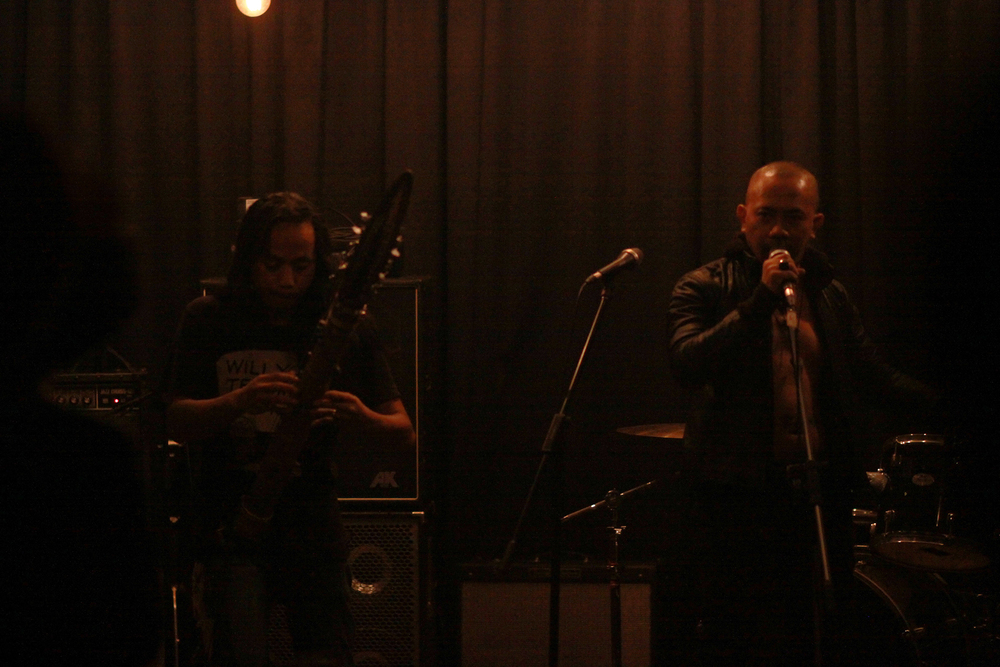 - When did you first meet each other?

RS: It was on stage during Wukir's solo performance and I had an improvised session with him. That was in Yogyakarta in 2010.

Wukir Suryadi (WS): Yes, I was playing solo with the same instruments.

- What kind of things were Rully doing before Senyawa?

RS: I was playing in a band called Zoo. Zoo is an experimental and conceptual punk band.

- Why did you both decide to play together as Senyawa?

RS: There is not really a reason, it just happened. We tried recording and we released it. Many people started to ask Senyawa to play and it's just that these requests haven't stopped till today.

- Where you first mainly playing in Yogyakarta?

- Do you know how many concerts you have played as Senyawa?

RS: Probably more than 100. We go somewhere every month. It's very fun. We play in Europe, Australia and sometimes in United States.

- I saw a video of you interviewed that Yuta Tsukahara from contact Gonzo. In this interview, you say that Senyawa's music is metal.

RS: If our music had to have a genre, it would be metal. But our sounds are not metal, I mean it in a more symbolic way.

- Wukir, were you playing traditional music before?

WS: Yes, I was playing percussion and flute.

- But you were also listening to rock?

WS: Yes. A lot. I listened to rock from around the world.

- How do you make your songs?

WS: They are just sessions. Improvisations.

RS: Our older songs were more composed, but recently we improvise more.

- In Indonesia, can you write lyrics about anything?

RS: It is free now, but in the 90's it was not like this. The lyrics in punk, hip hop, hardcore are very extreme. You can say anything, except about religion.

- In Senyawa, what kind of things do you sing about?

RS: They are different from lyrics in regular songs. More like poetry. Especially for our album Acarak, they are poems about the relationship between human and nature. Also sometimes improvised words.

Not performing in alternative art spaces but in musical venues

- You are planning a headlining concert in Indonesia soon. Why are you doing this?

RS: We thought it was the right time. We have headlined concerts abroad but never in Indonesia. We think it's about time that we show our performances to the people of Indonesia.

- You are playing this concert in Jakarta. Why not where you are both based in Yogyakarta?

RS: It's the capital of Indonesia.

RS: If you were to attack a country you would hit the capital (laugh).

WS: The venue is GKJ (Gedung Kesenian Jakarta). It is a very old theater and is used for classical orchestras.

RS: It is very formal and elegant place.

- The venue of Asian Meeting Festival, The Projector is also old. Is it similar?

WS: GKJ is more of a traditional kind of theater.

RS: It is shaped in a dome.

- Do rock bands play there?

- So you will bring all the equipment?

WS: Yes, all equipment including projectors. We will come with a team of 10 members from Yogyakarta on bus.

- Are there many people in Jakarta that know about Senyawa?

WS: Only a few people know about us.

- How many people do you expect to come to this show?

- Is there a music venue that you like in Yogyakarta?

WS: We don't play so much in Yogyakarta. We have played in small venues a couple of times, but usually it is more at alternative spaces or at places that our friends run.

RS: We can rent a concert hall but it is very expensive. So usually people in our scene would play at a DIY space. Music venues in Indonesia are for mainstream music.

WS: Our concert in Jakarta will cost us several months of our earnings.

- How much does it cost?

RS: About six million rupiah. That's about 6000 US dollars.

WS: We want make a powerful concert even if it costs us an arm and a leg. We need kick Jakarta's ass (laugh)! If you pay money you can do a large concert. But we want to start with Jakarta, the capital. After that we will play in other regions of Indonesia. Not only in alternative spaces, but at music venues. By doing this, more people will be interested in live music and it will help our music.

- Is it difficult to sustain DIY activities even in Yogyakarta?

RS: Yes it is. But everyone is working together to build their scene and trying to gather audiences. It is progressing slowly.

- Can you tell me about the music scene in Yogyakarta?

RS: It is probably the most active music scene in Indonesia. Maybe even the most in Southeast Asia. But everything moves at a very fast pace. There are also scenes in Borneo, Surabaya, Sumatra, and there are fantastic experimental musicians.

There is a strong culture of experimental music in Asia

- What do you have planned for after your show in Jakarta?

WS: We will play at TPAM in Yokohama, and then have a collaboration with a dance company in Melbourne. Also we will play at Womad.

- How about new releases?

WS: We just decided to work on a new album. In 2017, we will take a month off to focus on making this.

RS: This will be released as a LP from a label in Germany.

- Do you plan to start your own label in Indonesia?

WS: I personally run a small cassette label. I release my own solo recordings and my friend's work. I think we released Senyawa on cassette tape too.

- What is the name of your label?

- What does that mean?

WS: Where I am from, in slang, SILIT means asshole. So I spell it in reverse.

- How is your daily life? Do you have other jobs?

WS: Me too. I do Senyawa, some theater art projects, and exhibitions.

- How is it collaborating with dance companies? Do you work together with people outside of music often?

WS: It is very fun. It is like visiting a new town. Before, there were moments where I thought it didn't work out, but I gain a lot collaborating. For example, thinking about timing, how to work with a conductor, or figuring out how to work with the personality of the stage directors, and so on.

- You have just finished two days of Asian Meeting Festival in Singapore, what did you think?

WS: Very nice. I liked the playing of all the participating musicians and we can all talk together. It felt like it will lead to something in the future.

RS: Also the fact that we are all Asian. It is very nice to build such network and it is hopeful. There is a very strong culture of experimental music in Asia.