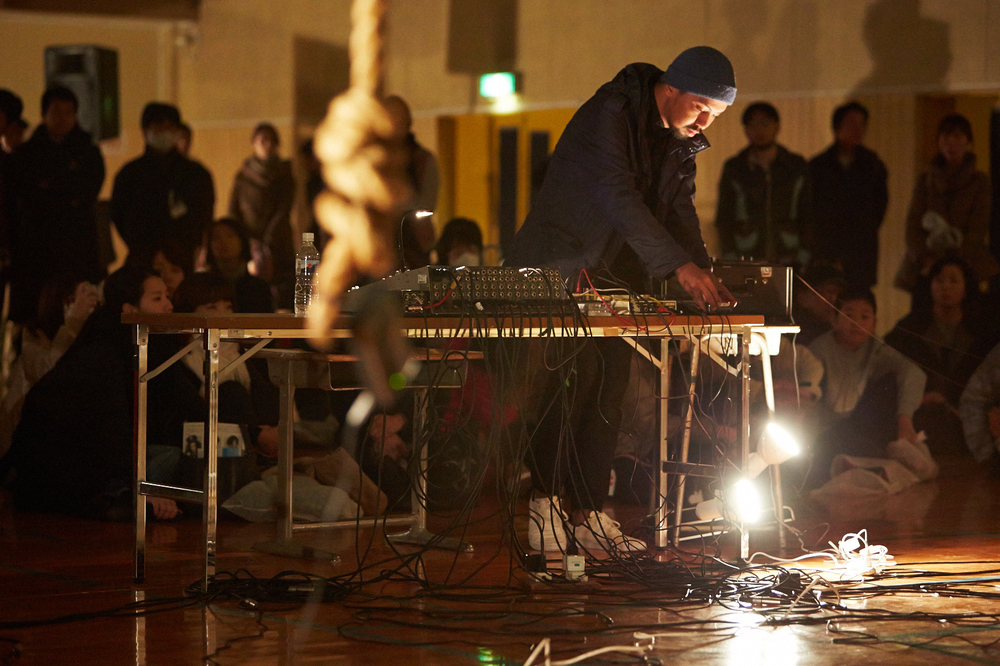 
- Can you tell me what you planning to do at Ensembles Asia Special?

I was invited this time to give a presentation about my work, lead a workshop with the local community, and present the results in a form of public performance. I decided to do a DIY cassette tape loop workshop, which is taken from an old project of mine. I plan to perform an improvised set with the participants and the loops they made in the workshop.

I have been working with cassette tapes in my work for the last 6 -7 years. I thought I know the media enough that I would be able to take it further for this occasion. Perhaps what makes me unique is that I studied painting. My bachelor degree is in visual arts and fine arts. When I studied for my Master's degree in 2007-08, I focused more on sound installation and performances. However, even before when I was painting I wasn't making typical work that was painted on a canvas, I was using found objects and ready-mades. For example, pieces of wood that I found outside.

- When did you start working together with a general public?

As a workshop format, I started early this year. However, in previous installations I have invited audience members to participate and take part in the artwork. In 2013, I had the opportunity to be in Cairo for one month for an artist residency hosted by the Jogja Biennial. I was asked to make work based on research in the city, so I looked into Egypt's pop culture and music.

At the time Egypt was going through a difficult but interesting time. There were two revolutions in one year. I was there at a time when the political situation was drastically changing and daily life seemed to be also shifting rapidly, so it was very inspiring.

I decided to collect Egyptian LP records from the 60s and 70s and make work out of it. I first cut the 7 inch records in half and made an installation out of what was left that looked like the letter C. The audience was allowed to take any two halves of the record and combine them to be played on the turntable. This was inspired by the revolution and the title is called "C.C Record." The audience is free to combine any record together to complete the circle. At the exhibition space I screened a video of the combined records playing.

We use "RPM" for the rotation speed of the record, don't we? This is an acronym for "revolution per minute." Revolution of course means rotation in this case, but also means a political overthrow. My work has a double meaning of how many times the disc rotates in one minute and how many revolutions can happen in one minute. It is scary to have two revolutions in one year but at the same time I believe it is also very hopeful. My discs are all in half, so I need the help of other people to complete the revolution - that was the idea.

The title of the work "C.C Record" is also a pun. The first revolution in Egypt was by revolutionary Islamists and the first president was Mohamed Morsi. The second revolution was a coup d'état led by General Abdel Fattah El-Sisi. Half of Egypt believes that he destroyed the country, and the other half thinks he is a hero. His nickname was "C.C." I was also referencing lyrics from a Swedish punk band called Refused where they sing about "a revolution without a dance is meaningless." People who visit my exhibition can chose their own revolution to dance to.

- Do the cassette tapes you use for this workshop also have the same kind of meaning behind?

Cassette tapes are simply just a form of representation that I chose for my interest in people and time. When I held my first exhibition in Bandung in 2010, I had many conversations about the concept of the loop. I believe that the idea of the loop itself could be a metaphor for the relationship between people and time.

The reason why I chose cassette tapes this time is because it is visually clear. With a cassette tape you can directly look at it and understand the mechanism of how it loops. I thought that by looking at it would be a good segue to more fundamental concepts on our relationship with time.

Of course I can use digital media to make loops and show it, but I think that analog is more effective. I use found objects and ready-mades in my sound installations and performances, and these are artifacts that were results of a certain intention or process. I believe there is meaning to using such artifacts when you think about time and the form it takes as past, present, and future.

I will also talk about this during my presentation with examples. The state we are in now is built upon many layers of ideas that we have selected or have discarded in the past. We learn from our past mistakes. Therefore in my case, I see found objects and ready-mades as foundations from past experiences to build something new. Without cassette tapes and the many experiments made with it, we would not have our world of digital technology and media. That's where we started. I would like to experience this process myself and build a relationship with the media.

- Can you tell about how you cut up tape and make loops? Are you going to randomly put together the sound sources, or will there be a rule to follow to make the loop?

I am asking the participants to bring their own cassette tapes. Usually these are personally collected, and sometimes they contain memories of childhood. There is a connection with the past. That is the concept of this piece as well.

I will teach the basic technique of how to make a loop and play it through the player. For example how to cut the tape, and how the length of the tape influences the length of the loop and so on. The participants will choose other things, such how to use the past, what kind of sound they want to use.

For me, a loop is a collection of fragmented memories. Our memory is not like a photograph where a total image is recorded but we remember certain moments and parts. I think of a loop as something that connects these parts, these fragments of memories.

After everyone makes their loops, then we play together. But not all together at once but we talk about the order of playing and which loops to play in combination. I would like to compose together with all the participants. That process will also encourage them to communicate with their own past. It is also about going back to the basics of music - to listen, respond and play together. We jam with our own memories and we play together, this is what this workshop is about.

- I was very intrigued by your exhibition in Egypt. I understand that you are interested in politics as well, Have you done such exhibits in Indonesia, your home country?

Although I am not interested in making a statement about politics or presenting my position, I am interested in the concept of politics. When I was experiencing the revolution in Egypt, I felt it was important to be sensitive to what is happening around you as an artist. The Jogja Biennial had invited me to a festival that focused on the relationship between Indonesia and the Middle East. Within this context I proposed to do a project in Egypt and followed through, so perhaps this is political action.

I usually don't make political statements through my work. There are times when a political situation is referenced depending on the context. One example is when I collaborated with Akira Koizumi at the Shanghai Biennial in 2011. As you know Koizumi is known to be very political, and his work is often controversial. I met him in 2011 at the AIT Shinjuku Tokyo residency. I discovered that he was a friend of my housemate in Bandung, and I thought "what a small world!" There we decided to work together.

At the Shanghai Biennial we made a work called Sync: Thank you, which dealt with the time that Japan had occupied Indonesia. This was a dark time in Indonesia and there were many opinions. The work was displayed for 2 weeks but afterwards the exhibition was censored and shutdown.

Oddly enough, we didn't know that our work was taken down. No one from Shanghai told us. A month after the opening, an Indonesian art collector who went to Shanghai told me that my works had its video stopped and only sound was coming out. That was one of the few works of mine that is directly political.