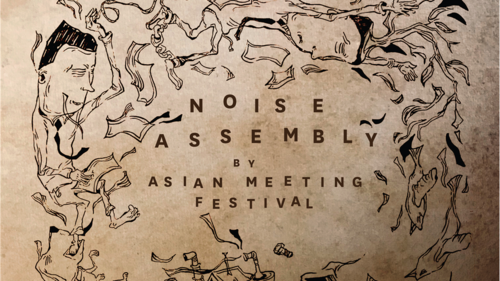 Enter a forest: the quieter you are, the louder your environment becomes. You listen and shift from being intruder to participant of an ecology sustained not by visual means but sounds that resonate and reverberate. Noise Assembly addresses such a collectivity. No stage or assigned seats - you sit amongst musicians scattered in the hall. Immersed in sound, there is no 'central' or 'ideal' listening point; vibrations arrive from near and far. With no score or common language, these musicians gather to play for the first time, listen and react moment-to-moment. There is hence no music here either, only the 'becoming of music'. Jacques Attali says that music is a prophecy to our society. Noise Assembly is what comes before this prophecy: the sound of burning fire that the prophet looks into and the heat felt on the skin. This is not noise of the "other" but of "ours" made by the act of listening together.

Asian Meeting Festival (AMF) collaborates with the Taipei Arts Festival to present Noise Assembly. Over 2 days, Noise Assembly will feature innovative and experimental musicians throughout Asia that push boundaries of music and blur the borders between the traditional and the contemporary. A total of 10 Taiwanese musicians and 5 Southeast Asian musicians will join AMF Directors Otomo Yoshihide, dj sniff, and Yuen Chee Wai for a 2-night performance at the Guangfu Auditorium. As in previous editions of AMF, the performance space will be reconfigured and transformed each night to create a unique listening experience. The musical program will include multiple constellations of performances by musicians working together in various sizes of groupings from small ensembles to A large-scale noise orchestra.