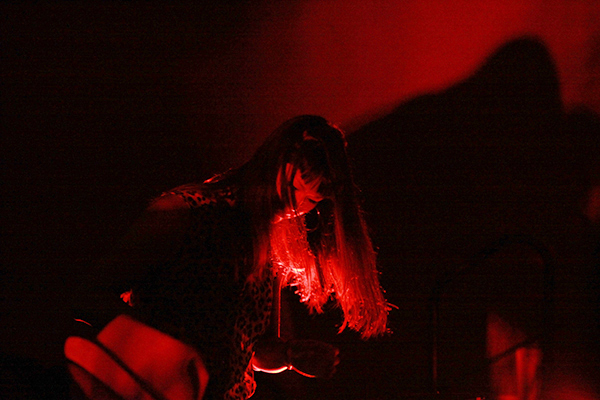 Responding to every sound

When I was around 16, I had a punk band, but I got bored of it because you always have to match with everyone else and had to be on time all the time. So then I started my own project ONE MAN NATION. ONE MAN NATION started as a solo project where I played punk music on the guitar alone.

- You used to play guitar?

My first instrument in playing music is the guitar. The first iteration of ONE MAN NATION was with a guitar and was acoustic, but later I started to use electronic instruments. That was around 2004, and afterwards I developed it completely with electronic sounds. I can't remember exactly when I started ONE MAN NATION, but I think it was around 2001.

- Why did you stop playing the guitar?

I got very bored. It felt like an instrument with limitations. Also, I wanted an instrument that I could deliver my expression more directly. The guitar didn't feel like something I can express myself with.

As a musician playing an instrument you want it to be part of you. I think that the computer is also an instrument that has limitations, especially when it comes to performing. However, even a computer I can touch and feel its textures. So I thought that maybe I can have the computer respond to how I touched it. This led to installing a contact microphone inside the MIDI controller. With the guitar or violin you can touch the instrument and the sound changes depending on how you touch or play it. I wanted to have a similar feeling when I was playing the computer. That is why I added a contact microphone to have the computer react in an interactive way to every movement I make with sound.

I have also taken the screen away from the computer. I really hate the LCD display of the PC. The visual element prevents me from directly expressing myself. I started using a LED button pad so that I can control the computer without a screen. I can understand what is happening in the computer by the lights underneath the buttons so I don't need to use the screen anymore. I settled on my current set up around 2007.

- Ok, so that is why you have your laptop closed when you are performing. What kind of music did you grow up listening to?

I don't play solo in front of the audience.

- What inspired you to make music with electronic instruments? I thought maybe you listened to techno or something.

No, I have never been into techno or any kind of electronic music. Punk is where it begun. I am always thinking about where my emotions and senses are. I want to be able to deliver these emotions in my expression. With punk, or even any kind of music, I am not interested in its style at all. I am not interested in making a point on how punk or electronic music should be either. I am trying to find something outside of that, about the sound itself. Even if I was a punk musician, I think I would still use the computer as an instrument because it can transmit myself the most.

I also prepare for my performances. I try to take in every possible thing that can happen during a performance. I don't play solo in front of the audience. Usually I play in the middle of the floor, off stage, and I try to play together with everything that surrounds me. This is because I believe that my performances are a collective effort made with the environment that it is placed within. All of us in the same space come with a different history, life story, way of conversing, and emotions. During the moment of performance, each of our senses such as listening, vision, and smell become interactive. Even without words, I can receive these senses and I try to reflect it in my performance. This becomes music through improvisation.

- How do you feel after the first day of the Asian Meeting Festival and today's soundcheck. Wasn't it a unique environment to be surrounded with so many musicians?

Some of the members I know for a long time now. Many years ago I played with Senyawa's Wukir Suryandi and dj sniff at STEIM in The Netherlands. When I was living in The Netherlands, I started a project called The Future Sound of Folk to work on music that mixes traditional music and improvisation. I went to Indonesia and met with Wukir and we worked together. At the end of this project, dj sniff, who was working at STEIM at the time, invited us back to The Netherlands, and I toured together with Wukir. All my music is improvised, and this project was inspired by the method of improvisation.

To answer your question what I thought of yesterday's concert and today's soundcheck - I wasn't feeling the large orchestra we checked today with everyone (This interview was conducted before the second concert in Singapore after soundcheck). I try to be aware of space and frequencies. When there are that many musicians it is difficult. You can't find a place for your sounds. There were too many sounds flying around, and I didn't feel the need to play. I understand that this orchestra was made under an artistic direction, but I feel everything died on stage. For myself, improvisation is more like a conversation. If you ever have a chance to see The Future Sound of Folk, I think you would understand what I mean. Musicians respond to each other and play true sound and true music. It is really a conversation.

Collaborating with transwomen through art.

- I heard that you are now based in Chiang Mai. Why did you decide to live there?

Because, it's a quiet and a small city. I like the daily life in Chiang Mai, and I am planning to open an art space there.

- Can you tell me about the space?

I am hoping to open it in February of 2017. The space will focus on women rights and diversity, and will be a performing arts space. We would like to be a space in Southeast Asia that can continue to have conversations about issues, which have fallen out of the discourse in the art world.

- I have seen some of the events that you organized in the past called Translæctica and International //gender|o| noise\\ Underground. These seem like they will continue in Chiang Mai. Are you planning more events that address human rights issues?

International //gender|o| noise\\ Underground deals with issues related to queer culture. It's an art festival for transgender people, but it's a small event even when we call it a festival.

- You have performed there as well?

Yes, as one of the performers.

- You connect transgender identity with music, how is the response from the audience?

The response is good. In my view, Thailand is very tolerant toward queers. There are not many problems with gender in Thailand, and there is a context to do a festival for queers. In contrast, I organized the same festival in China and the situation was completely different. They are very oppressed there. Any expression related to gender is suppressed and the non-heterosexuals are invisible.

I have been collecting videos since 2013. I travel to many places and meet transwomen. There I try to understand their situation. It's not really like an interview but I try to have an artistic collaboration with them. This collaboration is not announced nor do we make flyers, but we do a creative project together in some kind of space. I then document this. In the future I would like to make this into a visual work. There is a lot of footage and information and I will need time and money. It will take a long time and it is a difficult project. But I think there are opportunities. I met transwomen in China and had a chance to talk to them on how they live. We explored how we could collaborate. This project is not like my usual musical collaboration, and will be based on an agenda rather than sounds. "How to meet with people and how to collaborate. " Now that I look back, these last three years have been spent to find collaborators and document for this project.