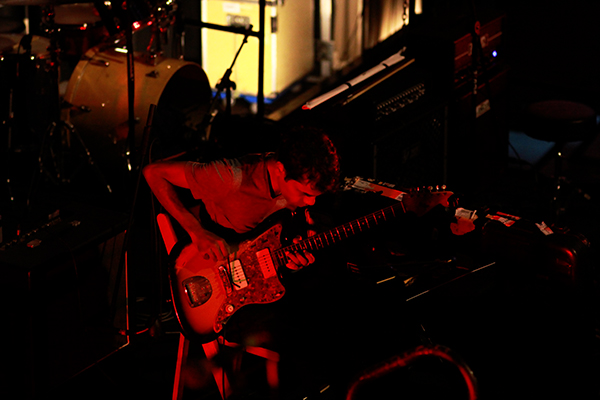 Playing guitar for 30 years without sounding like a guitar

- When did you start playing music?

I thought you would ask (laugh). I was born in 1969, so I am 47 now. I started playing guitar when I was living in Penang in Malaysia.

- How did you start playing?

Before I started to play the guitar, when I was around 10, I really liked listening to music. I was listening to pop music like Elvis Presley and the Bee Gees.

- You liked the oldies.

Yes. I think around 1977 I started to listen to hard rock. The first band was AC/DC. I became obsessed with rock and wanted to play it myself, so I taught myself how to play the guitar.

- Did you have band?

When I was 15, I formed my first band at school.

- In that band did you play hard rock?

Yes, but I was also influenced by pop music from the 80's - new age and post punk. This was before new wave happened.

- How did these early years shape into your current, more experimental style of music?

I played in many bands that played various types of music such as classic rock and blues. In the mid to late 90's I was exposed to electronic music. I wanted to make this new music that was made electronically with the guitar. At the time I didn't succeed, but gradually I became able to make sounds from the guitar that doesn't sound like they are from the guitar. This challenge was the starting point of my experimental music.

- So you didn't pick up an electronic instrument but kept playing the guitar?

I continued to play the guitar. I have played the keyboard in the past, but just very basic stuff.

- At the time, how did you find out about music? Did you use the Internet?

There wasn't Internet at the time so I was listening to the radio. There was a show with two DJs in Singapore and they played new music. Not mainstream music, but underground music.

- This was a Singaporean radio show?

Yes, I moved to Singapore in 1989, and I was listening to Singaporean radio. I would also occasionally buy magazines for information on new music, and also friends would tell me. Some of my friends were DJs, so electronic music and dance music was very close to me. The beginning of the 1990's was an interesting time. Dance music had changed drastically from the 80's. You would buy a CD and then trade with your friend's CDs and records. But we didn't have much money, so we couldn't listen to a lot. Today we can listen to so much through downloading off the Internet. Times have really changed.

- You used to be a member of Singaporean band The Observatory. When did you join?

The very first The Observatory was formed with Vivian Wang, Leslie Low and other members. When the others left the band Vivian and Leslie invited me to play at their gig as a supporting guitarist. That concert was in 2002.

- Did you know Leslie and Vivian from before?

I have known Leslie for quite some time now, since the 90's. He was in other bands and so was I. The music community in Singapore is small so we knew each other. I met Vivian for the first time in 2002.

- After that you joined The Observatory and stayed as a member for a long time, more than 10 years, correct?

- I am sure you experienced a lot with The Observatory. How about your solo work? Were you playing solo while you were in the band?

I only started playing solo in 2013. That year I released some solo recordings, but I started to perform on my own after I left The Observatory. It was more like "I'm not in a band now so I am playing alone. "

- But you did play improvised sessions with other musicians while you were with The Observatory?

Yes, I did improvise with other musicians with the band.

- The music that The Observatory plays is quite different from improvisation, how did you approach improvising?

The challenge to control tones through extended techniques and composing.

- You are working solo now, but how often do you play in Singapore?

Not so much. This year I had many opportunities, but sometimes I have nothing for two months and other times I will play several times a month. This year I went on tour in Indonesia for the first time.

Very good! I travelled from Java to Bali.

- Is there documentation of this tour?

I made videos of the performances so I hope to upload online soon. I toured with five musicians. One of them was Ikbal Lubys, a friend of Wukir Suryadi from Senyawa, who plays the guitar very differently from me. The others were musicians from Demark. It was a low budget tour so we played at small venues, and these places didn't have good equipment. At times I wished I could play on better speakers and amps but it was good training for me to try to figure out how make the best with what was available at each location. The audience seemed to be very interested in what we did.

- You were also involved in organizing Playfreely (An experimental music festival initiated by The Observatory) when you were in the band.

I was also organizing events for improvised music with a friend between 2012- 2014 aside from the activities with The Observatory. It was called Earthbound and we hosted it at a venue called Vault. They had a nice sound system and we invited people like Tara Transitory. We had occasional guests from abroad like Lasse Mauhuag who played with Leslie Low, but mostly it was local musicians.

- Are you still organizing this event?

No, not anymore. After I left The Observatory I moved to New Zealand, and the event stopped then. Now I am back in Singapore, so sometimes I think of starting it up again, but I don't have a car anymore so it's a bit difficult. To organized I need to transport amps and lots of gear, so without a car it would be hard to manage.

- How was it for you to participate in the Asian Meeting Festival in Singapore during the last two days?

It was an amazing line up, and I had a very valuable experience to be surrounded with such talented musicians. Senyawa, Jojo Hiroshige, Otomo Yoshihide are all fantastic musicians. I was very humbled by all the good artists who participated. I was inspired and very happy to be part of it. It was a unique experience for sure, especially to play noise in such a large ensemble.

- This time there were many guitarists. What did you think of them?

Very crazy! Indeed there were many guitarists this time, but they all had different styles. I think every guitarist had a mindset to be different from every other kind of guitarist. I was very happy to meet every one of them. I liked Atsushi Araka - he was playing very differently from me. Also Senyawa's Wukir plays an instrument similar to the guitar but he told me that "guitars are shit!"

- Arakawa was also very excited to see how you played the guitar.

I am very happy to hear that. I like how he plays and I also like his band Red Temple. I think this festival was a very good experience for everyone and there won't be anything like this again. It's also a little bit sad that it will end tonight in Kuala Lumpur.

- What kind of projects do you have coming up?

I will be working together with The Observatory again in March of 2017. We will be playing a concert with 30 guitarists in Singapore. This is a collaboration with the University of Singapore and will be the first project in next year. Leslie is writing new material for this and we will be also playing songs by The Observatory.

- How about your solo project?

I would like to compose and record. I will release this on Bandcamp. In terms of composition, I feel that I have a deeper understanding of the objects I use to perform with and against the guitar. When I put an object on the guitar I may know the texture it produces but it was hard for me control the pitch. However, through practicing I have been able to generate pitches. I experimented with different areas of the guitar to place the objects and learned to have more control of the sound. I know that to continue something brings the best results, so I am trying to control pitches without depending on effects. If I can achieve playing pitches I can play not only noise but also compose. This will be a big challenge for me. I don't know if I will immediately succeed, but I will try to make gradual progress.