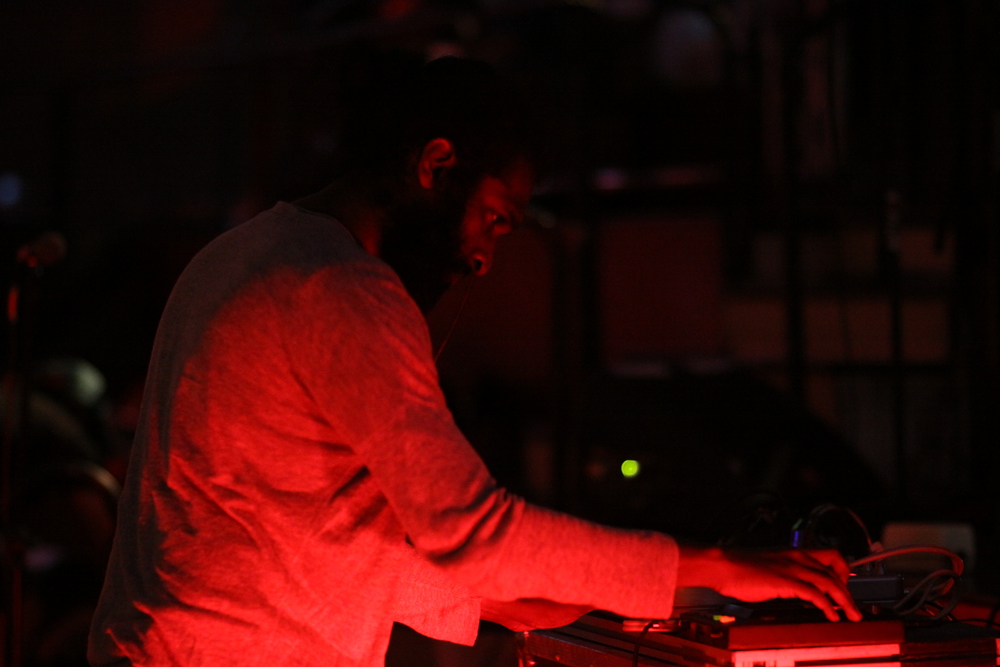 --You were born in Kuala Lumpur, and you still live there?

--What kind of instruments do you use?

I combine different equipment in my set. Signals from effect pedals and noise generators are connected into a feedback loop. I also have a Kaoss Pad connected at the end of the signal path.

--Also in today's soundcheck you were stepping on something, what was that?

That is a metal rack. It looks funny, but it's a dish drying rack that I have attached a contact microphone to. Most of my equipment are electronic instruments that use electronic signals so I wanted something that I can make acoustic sounds in a physical way.

--Do you change your setup often? Do you plan to add any new equipment?

I am not thinking of adding anything at the moment. I am trying push to the limit what I can do with this setup. Probably, although I don't desire it, one of my gear will die and I will have to replace it with something else.

--I have seen you play at FINDARS in Kuala Lumpur. That time you were playing in duo with another musician.

I have played so many times at FINDARS. What kind of performance was it?

--It sounded like harsh noise and you were also using your voice.

Did my partner have a beard? I am not sure if it is the one you saw, but it could be the project with Azzief called HKPT. HKPT stands for Hello Kitty Pirate Tattoo. Recently with HKPT we have been doing concerts that are like power electronics. I am also trying to make explosive sounds without using much of the setup I use today, but more physical expression with my voice. It is a good opportunity for me to try out different things.

--Do you play other genres of music? For example, do you play songs that have melodies or riffs?

Yes, I sometimes compose. However, I rarely perform my compositions.

--In your biography it says you organize a theater project for kids.

This is a project called Main Wayang. Main Wayang is a collaboration between Malaysian artists Fairuz Sulaiman, Ayam Fared and myself. We use shadow puppet theater Wayang Kulit as a format to teach children to make a 15-minute shadow theater piece. I teach the kids how to circuit-bend.

Yes, circuit-bending for kids. Fairuz Sulaiman teaches them how to live VJ. Wayang Kulit is kind of a live visual using dolls. We prepare a live camera and the kids project on screen dolls that they have made. Ayam Fared is an actor, so he teaches the kids how use their body and express them themselves in the space. We give lectures to all the kids and then they each make a 15-minute pieces.

--In Main Wayang do you also teach how to compose?

Yes, but rather than composition we teach them how to make instruments. Also how improvise music to things that they see. We teach basic ideas of composition but we spend more time on how to improvise.

--How old are the students?

The youngest is 10, and the oldest is 20, but most are between 13 to 17. These are students in middle school in the Malaysian education system.

--How are the responses from the students?

Everyone is having fun. Sometimes we are really touched by what they make. They are really creative and very expressive.

--Is this an educational project by a NPO?

Fairuz Sulaiman originally started Main Wayang with three artists including myself as a personal project. First we visited several schools in Malaysia, but later Fairuz approached Putrajaya Beila Festival, which is a large festival for teens. We chose one group from our students and had them present in this festival. After this we are continuing as much as we can but on a smaller scale. We visit schools and have them present their work as part of their curriculum. We don't have them present to the public anymore.

--When did you start playing music?

When I started taking music lessons. I was small, probably in elementary school, around seven or eight years old. I was learning, what we call the organ but it's not actually an organ, it is an electronic keyboard. That was my first musical experience.

--Did you learn how to read music?

Yes they taught me but I was too young, and it didn't stay with me.

--Where the lessons just listening and playing music have fun?

To be honest it wasn't fun. It was forced. It was more to give children satisfaction from accomplishing tasks and going up in levels. It was like being fed. It didn't really mater if you didn't go up in levels. I was still young, and I didn't feel anything.

--How did you discover noise and improvised music and started to play this kind of music?

I don't remember clearly, but in high school I would get together with friends in the studio and jam. We would skip school and always be in the studio. We had to go somewhere to not be in class, so we would just head to the studio, but no one knew how to play instruments. So we improvised. This may be the beginning for my improvised music. We also listened to other artists and musicians and tried to copy them.

--What kind of music were you listening to at the time?

The first CD that I bought was Eminem. I was also listening to new metal like Korn and Limp Bizkit.

My generation listened to new metal.

--Some areas in Asia, it is difficult to listen to rock music coming from abroad, but in Kuala Lumpur was it easy to listen to the newest rock music?

Yes. I think it is the same as all cities around the world. Before the Internet was big I went to CD shops. The shopkeeper would recommend a CD and I would take that to the listening booth and listen with headphones. If I liked it I would buy it. Of course it was biased by what the shopkeeper recommended but this is how I listened to music.

--Is there a CD shop in Kuala Lumpur that you recommend?

I don't really go to CD shops anymore. I like to buy at concerts these days. The transaction is more direct and it feels better.

--What was a memorable concert that you saw in Kuala Lumpur?

PAKATAN HARAM JADAH. They haven't been active for a while, but they played doom and very heavy metal. One thing that I really remember about a PAKATAN HARAM JADAH concert is that it was doom and stoner rock played under just a red light and lots of smoke - it was really a fantastic performance. And the sound was really loud. I haven't seen them play for long time.

--That sounds really nice. It seems like there are a lot of good shows in Kuala Lumpur.

That is true. In the local scene, I not only go see shows that I want to see but also to check out what my friends are doing. I don't go just to see the music or because someone is popular but also because it is a social thing. I like to go see different kinds of live concerts because it gives me time to think.

--Did you also play in a band?

I used to play a lot in a band. We stopped playing a couple of years ago, but my most recent band was Think!Tadpole!Think!. I played on a set similar to what I play today. The others were drums, bass, guitar, vocals, horn section and occasionally percussion. Sometimes the group would be as big as 10 people.

Important to not talk about music off stage

--Do you mostly play solo now?

I play more with other musicians than by myself. I have played many times at SPIL (Serious Play Improv Lab), which is a improvised music series that Kok Siew Wai and Yong Yandsen organize at FINDARS.

--SPIL is a monthly series?

Yes. Playing solo feels like playing alone in solitude but at SPIL series you are paired up with other musicians randomly. It is often playing in groups with more than two musicians.

--At SPIL, are there things you gain or things that you share with the other musicians?

I have played a lot and talked to many musicians at SPIL. We spend a lot of time off stage. To have a deeper relationship, the conversations off-stage becomes really important and we exchange information and ideas. Also I can see that it has changed when we all play together. I think the way we converse off-stage also influences our sounds.

--What kind of things do the musicians at SPIL talk about.

--It is as though you are building a community of improvising musicians. How is the response from the audience?

--In Japan, audience members for small experimental concerts are usually the same people. Everyone is a regular, and there are very few new faces.

There are regulars in our audience but they are usually involved in the scene, musicians or people who run spaces. There is hardly anyone who comes back to our shows as a pure audience member.

--How did you feel participating in the Asian Meeting Festival?

I was very honored. I had been listening to Otomo Yoshihide's music since I was 17 or 18, so I was very happy to play with him. I was also very happy to share the stage with all the other musicians and with member of The Observatory.

I think the current situation is normal. What I can do at the moment is just to continue playing. I have thought of the structure behind the scene and have been more focused on it in the past. But that made me distracted. For example, FINDARS in Kuala Lumpur is a space now run by dedicated staff. Before, musicians were involved in the organization, and it wasn't a bad thing, but it is better if they can focus on just one role of spreading the word. I have been thinking about this recently, and trying to apply it to myself.