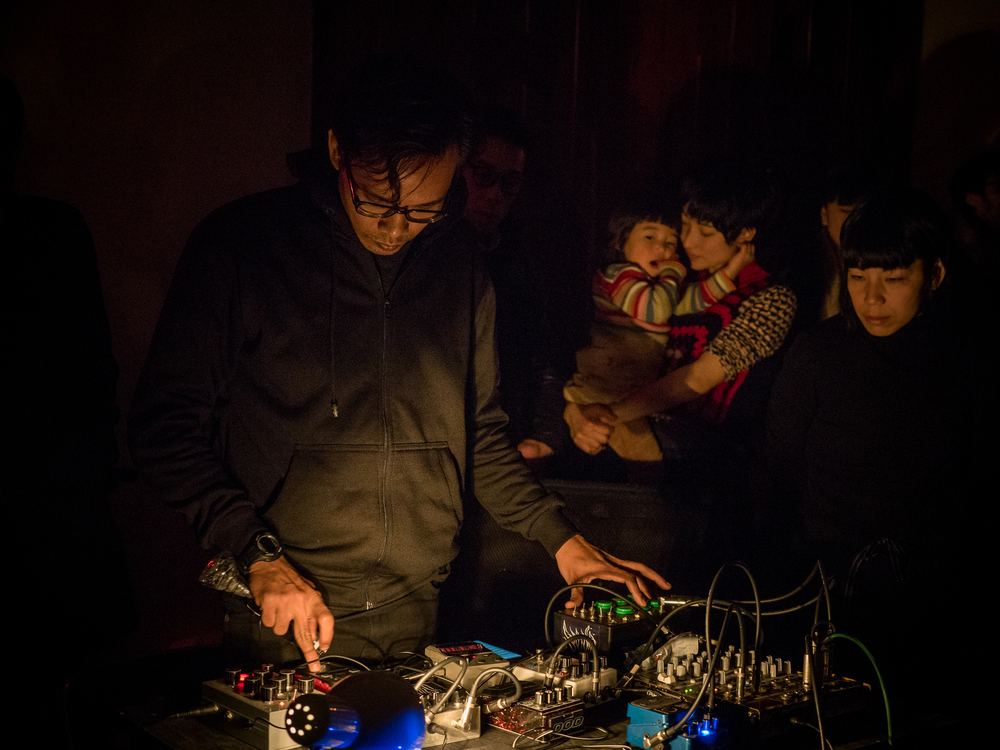 --First off, can you tell me your impression of being in this year's Asian Meeting Festival?

This was my first time to work with non-noise musicians. Everyone was an excellent musician and very unique as a performer.

--You usually don't collaborate outside of noise music in Indonesia?

Not so often. Even improvising the playing that I usually do in Indonesia and this time are very different. My friend runs an improvised music program called KOMBO in Jakarta and Jogja (Yogykarta), but that is also very different.

--Can you tell me about the gear you brought this time?

Pedal effects, handmade synthesizer and hand-controller, contact mic, and a metal-jam made from a beer can.

--You were crushing some kind of metal object during your performance, is that the metal-jam?

--Did you bring what you usually perform with in Indonesia?

No, not really. Of course there are some things that I use regularly, but I change my setup every time I play, so this time was something I prepared specifically for Asian Meeting Festival.

--I understand. I also want to ask about your background. You were born in 1983 in Denpasar, correct?

--Now you live in Yogyakarta?

--Did your upbringing in Denpasar have any influence on your expression or personality?

Not really. Probably my experience in Jogja has more influence on who I am than in Denpasar. Denpasar is part of a very traditional culture of Bali, and people from there are bound to this. Jogja is more dynamic - the two are very different.

--So you are not influenced by any traditional culture from Denpasar?

--So what kind of relationship did you have to the traditional culture of Denpasar? As a child did you want to escape it?

I didn't hate it, but I was more interested in other things. I had friends interested in punk, metal, and underground culture in general, and they influenced me.

--What inspired you the most at the time?

The first thing I really liked was Sonic Youth. I had never heard anything like it before and as soon as I heard it thought, "I want to make music like this!" Afterwards, I started to listen to more extreme things like noise, and encountering Japanoise as well.

--Who is your favorite noise artist?

Masonna. I was impressed by that energy. Also his improvisations.

--How old were you when you first heard Masonna?

I think it was around 2002 or 2003, so I must have been around 20 years old. Moving to Jogja allowed me to explore many cultural things. I had time and money, and being in art school gave me a lot of opportunities to experience new things.

--In art school you were studying printmaking?

Yes, for me printmaking was a new expression, so I wanted to try it out. Also, many interesting bands came out of the printmaking department at ISI. The oldest band is Black Boots. Another band called Seek Six Sick is also from my department. There are also noise, psychedelic rock, krautrock, and other experimental bands that came out of there.

--Why do you think the printmaking department became such a brewing ground for bands?

If we were in the music department or at the conservatory, we would have studied classical music or jazz, and not consider making experimental music. But because we were in a completely different field of studies, I think there was a drive to do something more extreme.

--On your website you have your own paintings and drawings. I was surprised to see motifs based on Japanese characters like Ultraman or Astro Boy. Were you influence by Japanese pop culture?

Japanese comic books and films have been brought into Indonesia for a long time now - since the time of Doraemon. Japanese pop culture is embedded in many parts of a large part in Indonesia, so of course I am also influenced.

--I want to ask about your activities in music - how did you start?

I moved to Jogja in 2002, and in 2004 I started a band. My first band was a noise group called Black Ribbon. Afterwards, I broadened my activities and also started to play solo as Sodadosa.

--When did the noise and experimental music scene in Jogja begin?

--Why do you think this happened in Jogja and not in Jakarata, the capital city of Indonesia?

Jakarta is of course a big city, but Jogja is culturally more dynamic. People in Jakarta are busy and the city is geographically more spread out so musicians live in different areas. In contrast, Jogja is much smaller and it is more laidback. It's easier for musicians to get together.

--Is there a central venue for the noise scene in Jogja?

There is no particular venue. Even if we could rent one out it's too expensive for us, and they wouldn't let us do our music because it's too loud. That's why we have been playing on the streets illegally.

For example by stealing electricity. People started to recognize us doing this and the word spread on social medial. As a result some galleries would rent their space for our events, but even then we don't have a singular location that we always hang out and we keep moving to different places.

--You mentioned playing on the streets, is this the Jogja Noise Bombing?

Yes, but we also play on the streets for other occasions too. Jogja Noise Bombing is the name of an event as well as for our community. We also run a label with the same name and sometimes host workshops too.

--Are there any themes or values that you promote with this community?

We don't really have a theme. Just that many noise musicians get together to play. And we work together on various projects. We don't really bind ourselves to themes. We are about 10 members but each one of us has numerous projects and release under different names.

--Is it difficult not having a home base and constantly having to move around?

Not really. Our friends help us, like providing transportation. It actually keeps us free from restrictions and we can do whatever we want. But this is possible because we are in Jogja. It wouldn't be possible in Jakarta because it is very expensive. Most of Jogja's noise musicians are over 25 year's old, but if you are that age in Jakarta you would have more responsibilities with work or taking care of family. People there are caught in a dilemma between art and work, but in Jogja things are more relaxed.

--Can you tell me about your main project Sodadosa? Is there a concept?

Sodadosa is my solo project and for this I am trying to express the negative side of things. For example repressed emotions. Usually I don't really express myself to others, but I do this through music. Sadness, repression, frustrations, these are the themes for Sodadosa.

--Can you tell me about your future vision?

I want to continue what I do - experimental and progressive. That is my expression.