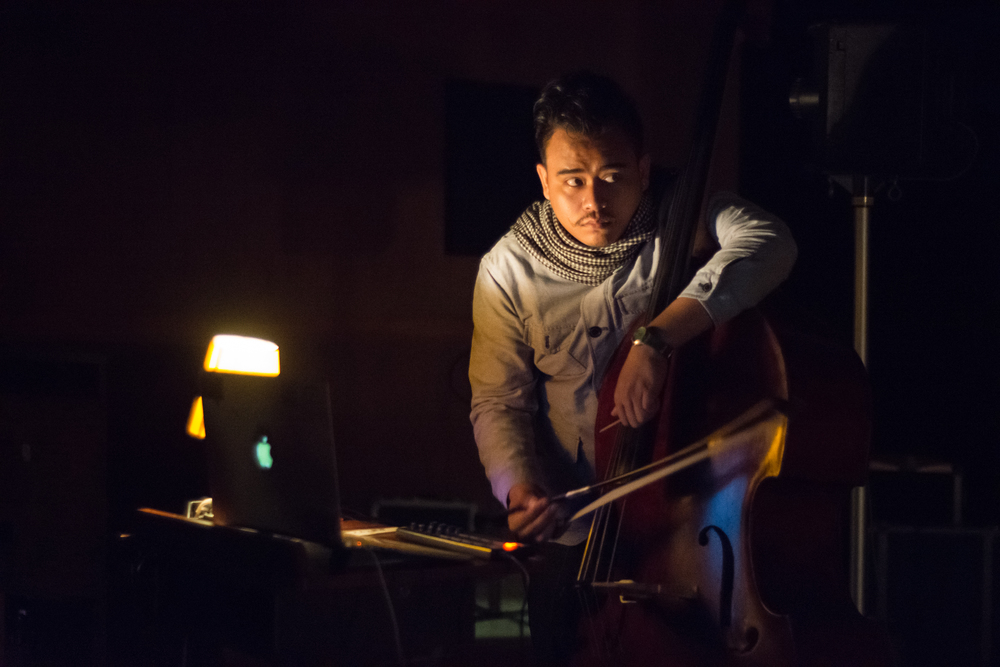 I started to study classical guitar when I was around six years old.

My sister was a violin teacher when they built the music school in Yangon in 2003. I told her that I wanted to play rock and the guitar but she said they only teach classical guitar so I had no choice.

In 2007, I met an Australian teacher and started to play double bass and continued to study up until 2010. After I graduated high school in 2010, I went to Singapore to study music. I joined a course that taught experimental music and noise and I immediately regretted it. During my first semester I questioned why I made such choice, but after the second semester I started to understand more and this has led to what I do now. So I am new to this kind of music.

- What have you been doing since then?

Since around 2011, there have been many noise festivals in Southeast Asia including Singapore and Hanoi and I had more opportunities to experience this music. There I saw Otomo Yoshihide and Toshimaru Nakamura playing his no-input mixer. They taught a workshop at the school I was studying at in Singapore.

I returned to Yangon in 2015, and many people in the city were starting to become interested in noise and I was the guy who "just returned from Singapore studying noise", so they inviting me to participate in the Yangon noise scene. I helped start up a gallery and organized a festival but there was no platform for these kind of things so I started a site called www.noiseinyangon.com.

- You are making music while you work as a sound engineer now. Can you tell me about how these two activities relate?

Originally I wanted to study audio production but they didn't have such course so I entered their Music Technology course. I learned about audio technology during my first year and focused more on creative projects in my second and third year.
When I returned to Yangon, I got a job where I could use my knowledge but my background is more traditional focusing on recording choirs and classical music. So I had never recorded rock bands or hip hop (laugh). I also really like microhopones and as a hobby I collect expensive microphones for recording classical music.

- Are your family rich?

Not really (laugh). I am asked that a lot: "You went to Singaproe to study music, you must be rich!" My father is a painter and when I graduated high school he asked me what I wanted to do. I said I wanted to study audio so we started to look for schools first in America but the tuition was too expensive so I chose Singapore, which was much cheaper.

The teaching of Brian O'Reilly

- I am surprised to hear that there is a course to study experimental music, but you said you were bored. Why did you decide on this course? Where did you first experience noise?

Like I mentioned earlier I wanted to study audio technology but my school didn't offer a degree in this. I wanted a university degree which would take three years, and if I attended a school in audio technology it would take another three years, so I looked for a course within my school that I could receive a degree in. There were five courses that I could choose from - composition, classical, jazz, popular, music technology. When I saw the word "technology" I thought I could still learn about recording. The leader of this course was Brian O'Reilly and he was someone pretty well known in noise.

- You liked jazz and classical more?

It wasn't that I am not interested and I listen to it, but I just don't play it. My job for recording classical music also involves working with orchestras and lots of traditional music as well.

- You said once that you were bored of playing jazz bass, and we saw you playing the bass through the computer processing the sounds with MIDI controllers. How did you arrive to this style?

The jazz scene in Yangon and in Myanmar is relatively new. It started around 2006-2007. Until then we had no cultural exchange with America, but German and French cultural organizations were vary active and many jazz musicians from these countries came to Myanmar. I went to these places to study, participate in workshops or play together with these musicians. It was really fun to play and learn about new styles and ways to make music. However after these facilities closed down no one came anymore and only the local musicians were left. They could only play standard jazz at bars and cafes, and there was no atmosphere to try something new, not even free jazz or fusion. I wanted to do something more crazy and since 2014, I started to play in the style I do today.

- Is there someone who inspired you?

Of course the things that Brian taught me had a large influence on me. When I joined the class I was playing jazz on the bass but he told me: "No, no don't play scales and cords, play sound textures." Because I had this training my playing started to shift to focus more on layering textures.

- Why do you still insist on playing the bass even after studying with Brian?

When people ask me why I still play the bass, I answer because it is my path. I was playing the bass for about two years before I went to Singapore, and at school there was no one else playing the bass so I could use it exclusively. My teacher was also an experimental bass player so I could learn from him. I don't have another instrument that I can play better on so I stick to it.

- What kind of bassists did you like when you were playing jazz?

Before I started to play the double bass I really liked Jaco Pastorius, after playing the double bass I became more interested in bands rather than individual players. Groups led by Coltrane and Herbie Hancock. If I had to choose a bassist I guess it would be Ron Carter. I don't like five string bass, so I like people who play on four strings.

- Who are your favorite noise musicians?

I like Cedric Fermond who is a noise musician from Berlin and also my former teacher in Singapore and experimental drummer who is now based in Tokyo, Darren Moore.

- You have released musique concrète pieces, but will you not release works played with the bass?

Yes, actually I am planning to, but I am spending all my money on organizing a noise festival in Yangon and building the website that I mentioned earlier, so I will start making the album after all of these are done.

You need practice and a plan even when you improvise

- Do you have a different approach to when you make musique concrète and when you play improvised music like during this festival?

If we talk about AMF, my approach to noise is different. When I was studying noise in Singapore I had a score and structure and would decide on the timing of events. I rehearsed a lot as well. In AMF, we just play so it is very different.

As a musician, I rehearse and I would set cues for songs to come in or lights to be triggered. Sometimes I use pre-recorded material that I recorded on the street or outside. It's like preparing a composition. I also take time to consider the poetic and psychological meaning in the piece while I am making it. In my case even if its noise I spend a lot of time on each piece.

- Do you not play free improvisation like you did at AMF?

I improvise, but I always set a plan when I play. During this tour I always had a plan B. The double bass was too big and I don't have a case so it was difficult to bring and I asked at each venue whether I could borrow one. In the end I was able to borrow the bass at every location but my plan B was to perform with sounds that I collected in Yangon.

- I find it very interesting how you talk about a plan when you play. There are not many noise musicians in Japan who think like that. In Myanmar, are there many musicians who play like you in the noise scene?

There are 13 musicians now in Yangon who are playing noise. Within this there are two other musicians that are older than me, and the three of us are leading the scene. Out of the 13, eight are young girls around 19 - 20 years old. Before concerts or workshops I always tell them not to come without practicing. That is something that I was taught in Singapore and my teacher always said that even in electronic music you have to practice like other instruments. Without practicing you cannot master it. So I am saying the same thing to the new generation of musicians in Yangon.

Sometimes I will upload recordings from rehearsal on soundcloud, but never use the recording from the actual show because it is full of noise. In my music soft and quiet sounds and their dynamics are very important. So when I upload my own performances I also use the rehearsals.

Experience is very important in improvisation, and the difference is very large between someone who has been playing for 10 years and someone who has no experience or who hasn't practiced. When you are asked to play with someone with no experience there is very little you can do. I have seen these kinds of situations before. So when we play we decide on the beginning and end and practice over and over again. We would decide things like "you start after 2-3 minutes in" or "at the end you leave first", "lets make a climax like this" and so on.

There were good moment and bad moments. It was fun to play with many different sounds. However it was difficult to play with people you have just met, and because I know the sounds I can make from my bass, there were moments where I was waiting for the right time to play for my sounds to blend. The way that I learned was to take into consideration the space, dynamics and density of sound, so we never made harsh noise. I try to observe carefully what other players are playing and find the right place to join. At AMF there were moment where we had to be hardcore and play loud. I may play loud because it is part of a composition and I am told to, but it's really not my style.

- But you played differently at each venue, didn't you? The concert at Kyoto Metro was loud but the concert yesterday (September 21) and the one at Fukuoka Asian Art Museum seemed like you were in an ensemble that everyone was listening to each other.

Yes I understand what you are saying. My groove changed depending on the day and the venue. But I feel that there were too many climaxes during AMF. If it was my own composition I would only use harsh noise at the climax and you only need it to happen once. I may create a drone with acoustic instruments and build up to harsh noise, but I wouldn't use it anywhere else. If it was a 10 minute piece maybe twice, if it was six minutes just once - this is the style I make music.

When you have many instruments and many players I would approach it like cooking. You have many ingredients and I would use them in a particular way so the flavor would be unique and different to when others use it. At AMF I had to cook Japanese food (laugh)!