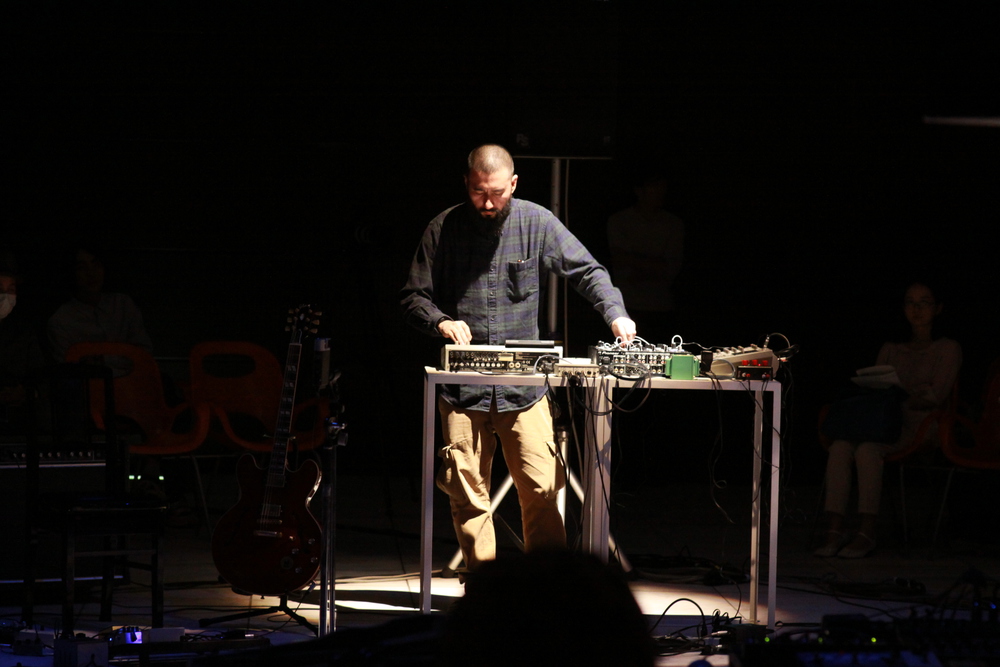 Defining one's self through hip hop

- Why did you decide to call yourself "Caliph8" (referencing the word caliphate)?

I am a Catholic Christian myself, but I learned about the term caliphate during my theology class. This was around 1993. The meaning of the word wasn't so important but what it represented seemed to match my situation at the time. This was during my formative years, around 15 or so. I was young but I knew that I wanted to be an artist so this name felt right for me.

Caliph8 was very original and since 1995 I used when I wrote graffiti, made paintings, and when I rapped. Since then I use this name for everything that I do.

- Can you tell me about your formative years?

I was a geek when I was a kid, seeing a lot of art and listening to a lot of music. By 1995 I wanted to analyze my listening history, so there was period where I started researching on how drum & bass and hip hop were connected to soul and jazz.
I was at art school between 1995 to 2000, and during that time I went deeper into music. I was interested in music that was not popular and was making very experimental hip hop, very left-field. I was also organizing festivals and trying to build platforms during this time.

Because I was making hip hop I became interested in different kinds of music and started to collect records so that I can sample them. I learned about many composers such as Harry Partch, John Cage, and José Maceda from the Philippines. At the same time I was listening to James Brown and Public Enemy. Also Haruomi Hosono and YMO too. I started digging for ethnic music, Persian music, Middle Eastern music, and Indonesian music for sampling. Hip hop was basically my navigator.

As I continued these activities I started to exhibit my work in galleries and make experiments with music, and I came up with the phrase "Conscious Postulate Chamber of Rudiments" as a kind of mantra for myself. This sounds official or institutional but its more a play of word to make the whole thing a joke.

- At university you were studying art and not music?

At university I didn't take any classes on music. However, before I moved to the States in 1987, for four years when I was between 6 to 10 years old, my parents put me in the national conservatory in Manila. There I learned the basics in traditional classical music like piano, music theory, solfège, ethnomusicology and so on. This was a program started by the Philippines National Artist, Ramón Santos. It does not exist anymore and I was very lucky to be part of it, although I hated it at the time (laugh). I liked the drums and wanted to play it, but my mom wanted me to play the piano and I had to do recitals, which I hated so much. After graduation I have never gone near anything like that again. Doing hip hop is probably a rebound from this (laugh).

After graduating from art school in 1995, I've became recognized in Manila's cultural scene, because I have been continuing to organize exhibitions and platforms independently without any government funding. At the same time I am also trying to work on self-awareness within the art scene and how one is perceived. I wanted to counter the condescending stereotype from the art world that we are not intelligent or taken seriously, and I wanted to transform the DNA of hip hop and develop ourselves through a discourse with academic fields.

Parallel to these activities in building platforms I am also active as a solo artist. As an artist I don't restrict myselv so I do sound performances, make installations, video art, and also paint. I choose the most adequate medium for realizing my vision and expressing myself.

Expanding the possibilities of hip hop

- What was your first contact with hip hop? When you were in the States did you have bad friends (laugh)?

Actually my first contact with hip hop was before moving to America. In the Philippines during the 80's hip hop was already popular and the area I lived in particularly had a lot of DJs. There were many DJs playing new wave, electro and hip hop. When I wondered around there was always a lot of music. When I was nine I had a neighbor who was 17, and he was a cool DJ. He was always blasting music and I would admire him poking my head out of the window. One day he invited me to his house and taught me how to DJ. That was my first experience with hip hop and it left a strong impression on me. When I moved to L.A. in 1987 gangster rap was popular but I didn't like it so much. I preferred abstract hip hop that worked more on your mind.

- I didn't know hip hop was already popular in the Philippines at the time. You just mentioned that you make abstract hip hop. Can you tell me about how you are involved with underground hip hop scene and left-field music in Philippines?

I see sampling as an essential method and I try to experiment with it. I have a huge collection of records and I extract and combine sounds from these to make new sounds and new structures. At the same time I spend time to understand each genre of music. Of course it is self-taught but if it's jazz I will analyze the techniques in the genre and try to reflect on it as a producer and sound maker.
Instead of looping a drum break, I would extract just the kick drum and use that in my own way on the drum machine. Rather than practicing the drums I would patch together sounds one by one or extract even smaller fragments of sound under a second and combine them to make a new sound. By working with sounds on this microscopic level I can transform the drums or other sounds that I tap out from my fingers into something that sounds like a synthesizer.

- I heard that in your 20's you were rapping on more standard hip hop tracks. How did you move towards more experimental approaches?

I was actually making leftfield hip hop from that time. Maybe it sounds like straightforward underground hip hop because it had a steady beat, but I was making experimental pieces during the that time too. I was already familiar with not only sampling and production techniques but also with distinct forms of experimental music and avant-garde compositions. Already at the time I knew the direction I was going to take in music, and I saw sampling as not something to just capture a moment of the past but as a medium to create something new.

- During the many sessions on this AMF tour, you had to improvise with many different musicians with various styles. Have you had such experience before?

If you mean playing with people from different musical genres, then yes. When I was growing up in Manila in the 80's I was exposed to not only to hip hop but many genres of music. I have been good friends with people who are considered to be the pioneers of punk in the Philippines. They must be at least 15 years older than me (laugh). I love punk and they respect hip hop. Although Manila is small there are scenes for shoegazing, industrial music, avant-garde, and free jazz. I have been in touch with all of these styles of music and have tried to deepen my understanding through using my sampler.

- What do you think about improvisation in hip hop?

Hip hop has its own sensibility that is unique. It's maybe similar to when Japanese people make Italian food. As Japanese you have your own tastes and characteristics but that doesn't mean you shouldn't make Italian food. You can study it and become very good at it. I am a hip hop fanatic, so when I incorporate other genres of music I bring it in through a hip hop approach. Even if I use a free jazz drum kit my hip hop background would combine them in a different way from free jazz and lead to new realizations.

The interesting thing about hip hop is, is that it naturally helps you listen to other music. Sampling forces you to connect with society. It helps you meet other genres of music without preconceptions. So if you are a hip hop head you would be interested in any kind of music from classical, Frank Zappa, Indonesian Gamelan, John Cage, and Sun Ra. Discovering other genres of music construct new sensibilities, new tastes, and new formats of music.

- Is it correct that the way that you performed music on this tour was the following three methods? 1) Playing sampled sounds from the pads of the MPC. 2) Capturing sounds from the contact microphone and processing these. 3) Using a cassette tape to manipulate your sounds.

What I consider the center at my performance is the MPC. Based around the samples in there I add some additional tools such as contact microphones, sound-making toys, sound sculptures, installations, and sometimes a Frankenstein turntable. This is a collection of broken turntable parts that I modify and rebuild into my own machine. I also record synthesizer sounds onto a cassette tape and play it back at super slow speed to make ambient textures during concerts or feed back these sounds through my mixer to create a saturated sound. This is usually how I play noise. I am interested in various techniques and I choose which one to use at each moment.

The concert in Tango was fun. The venue was an old elementary school so I used what I could find and played them with a contact microphone and effects on my mixer. I found a dish rack so I played it with a broom and toothbrush that I also found connected to the contact microphone. I processed these sounds through my mixer. I'm interested in ways to work with sound other than sampling too, and my music is a combination of all of these approaches.