In the Few Hours of the Opening DayShin Fukunaga 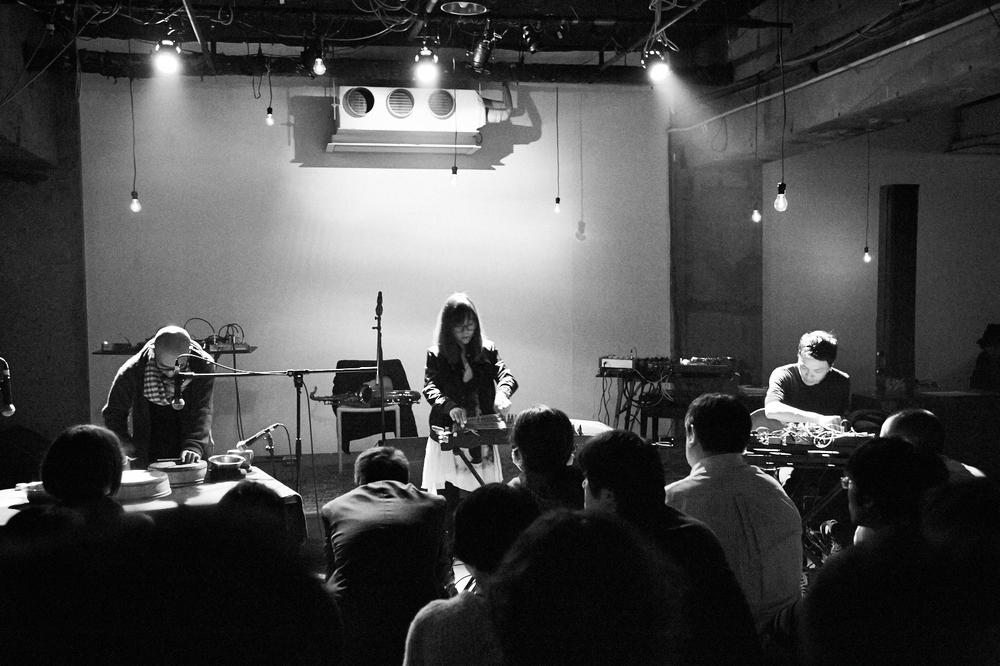 "We just met a few hours ago," said the man after the session. They had come from different parts of Asia, spent a brief time together and gave a two-hour performance, which has just ended.

The members have already gone backstage. The man who made the earlier remark was one of the project directors, speaking to the audience after the session.

A short while earlier the hall was filled with the sounds of about a dozen performers. It wouldn't have mattered whether they had just met a few hours ago, or even a week ago, if the concert had featured only solo performances; all they would have had to do is concentrate on their own parts. But this was an ensemble. Three or four members who "met a few hours ago" teamed up and played together, only to be taken over by another unit, followed by yet one more. Some performers created sounds by spinning a ball in a glass bowl or by inflating a plastic bag so large that it almost touched the knees of visitors in the front row. A saxophonist blew his heart out, while another artist kept twisting buttons with a poker face. The sounds crashed into each other, causing friction as they echoed off the walls, the ceiling and the skin of the audience. No sound by itself was heard.

Now the performance was over and the hall was quiet. The players were gone and the music had vanished. I contemplated the sounds generated by the performers. The man who told us they had just met was the only person still on the stage.

Also left on the stage, which was on the same level as our seats, were several guitars and computers; microphone cords hung from the ceiling, coiled around the microphone stands and hugged the floor beside loudspeakers. They seemed to be there as proof that the players and their music had occupied the stage.

The silent, vacant space was encircled by the audience's seats. The people remained with their eyes focused on the man. "We just met a few hours ago" was not all that he said; he was also giving the closing address. Listening to him we were thinking about the hours that would build up, a few hours, a day, two days, a week that would go by, and about the sounds which would linger in our minds over that period.

Recording equipment facing the stage was set up behind the audience. Everything from the beginning of the performance to the closing remarks was recorded. I learned that the entire concert would be edited, archived and released on YouTube.

When he said they had just met, he was not making an excuse or boasting that they had produced music together in a very short time and provided a rewarding experience. He was only stating a fact. He said "a few hours" instead of "an hour" or "three hours," probably because the performers had arrived one by one from all over Asia, bringing their instruments and their music to perform. Some might have said, "How have you been?" or "Nice to see you," while others may have exchanged a few more words. Maybe English didn't help them that much, prompting self-introductions by playing and rehearsing spontaneously. From his words I imagined that was how the "few hours" were spent.

He was referring to the players, but the audience that watched the performance had also just "met a few hours ago." They had come from various places and would leave soon. The concert lasted for about two hours, so they also shared a "few hours" of experience.

In front of the audience was the proof of the performance: several guitars and computers, cords hanging from the ceiling and coiled around the mike stands. Under the suspended lights were loudspeakers and water bottles sitting on the cracked floor. The sound had stopped, giving way to other sounds. The performers were mingling with the crowd, talking and laughing. Some visitors were looking at the CDs and records displayed for sale, others were taking out wallets to buy snacks and drinks. It seemed everyone wanted to stick around to make their own sounds.